Lift-off! My 90-second ride into the future of virtual reality | Art and design 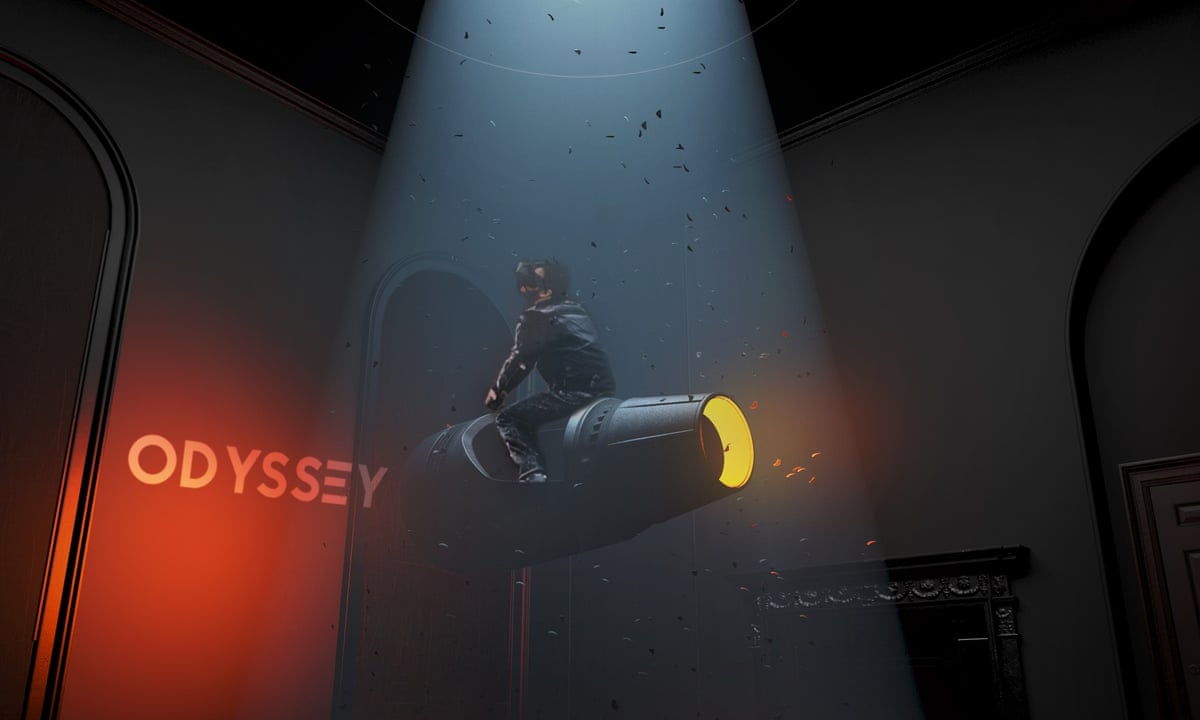 As part of the annual jamboree of avant-garde sofas and experimental spoons that is the London design festival , a little bit of Hollywood has landed in Somerset House. In amongst a suite of rooms showcasing the latest in minimalist shelving systems is Odyssey , an installation born out of the Los Angeles film industry that promises to “question our current definition of space and time” and explore design “on a more spiritual or philosophical level”.
Welcomed by black jumpsuited attendants with American accents, I am ushered into a room with nothing but a futuristic matte black turbine engine, standing momentously raised on a circular black plinth. Signing a health and safety waiver and confirming that I’m not overly sensitive to noise, I am strapped into a padded vest and virtual reality goggles and invited to straddle the turbine – and ominously told to hold on tightly.
Looking around in every direction, the room has been meticulously re-created in 3D, down to the nature of the light streaming in through the tall arched windows, the plaster cornice and the marble fireplace on one wall. Then liftoff! Before you know it, you’re floating somewhere above an imaginary landscape and landing back in the room 90 seconds later.
For anyone who has experienced virtual reality (VR) before, or been in any kind of simulator, the experience is all rather underwhelming, particularly after the warnings of motion sickness and expectations of an immersive bucking bronco ride. The turbine doesn’t move and the promised pummelling from the vibrating vest feels more like you’ve got a half-hearted bee trapped in your jumper.
Facebook Twitter Pinterest Underwhelming … a screenshot from the 90-second Odyssey journey. Photograph: Odyssey/LDF
Still, the installation provides a snapshot of a technology that could soon be ubiquitous on the high street, used in a way that is less about thrill-seeking rides and more about commercial brand experiences. Tino Schaedler , the German architect turned digital set designer who created the Odyssey installation, has worked with Nike, Porsche and BMW to create immersive brand environments, and he sees virtual reality as the next step in the theatre of shopping. “Imagine the ultimate fantasy flagship store for a brand like Nike,” he says. “That no longer has to be fantasy, it could become a reality. You could walk in and meet Lebron [James], then pick out your trainers inside a completely virtual world.”
Schaedler worked with architect Daniel Libeskind in Berlin before going to film school in Vancouver, which led him to creating digital sets for Harry Potter and Charlie and the Chocolate Factory. With his company Optimist Design , he has since brought his 3D magic to everything from commercials for Calvin Klein to music videos for Daft Punk . He sees VR as the next frontier in the total brand experience. “There’s a huge amount of money pouring into the technology,” he says. “It is predicted to be a $150bn industry by 2020.”
After Facebook acquired the young VR startup Oculus in 2014, for an eye-watering $2bn (£1.3bn), all eyes have been on the technology – now hailed as the future of everything from communication to training surgeons – which had been stagnating for decades as a clumsy, low-res fad. Oculus launched its Rift headset on Kickstarter in 2012, and it has been releasing increasingly refined developer kits since then (more than 180,000 have now been distributed). The consumer version is finally set to launch early next year, expected to retail at upwards of $200, mainly aimed at a gaming audience, but the Facebook acquisition suggests they have a 3D social networking use in mind.
Straddling the turbine … Oliver Wainwright tests out the Odyssey installation. Photograph: Odyssey/LDF “Seeing other people is incredibly engaging, and that’s one of the drivers that made us partner with Facebook – social communication,” Oculus CEO Brendan Iribe told Wired magazine . “Not social news feeds, but actual face-to-face seeing multiple avatars in a play experience – that’s going to be a very big part of the future in VR.”
One day, every website is going to to be a space – an environment that you can actually walk into
Tino Schaedler
Strapping a pair of opaque goggles to your face might not seem like the most sociable thing to do in the real world, but where Mark Zuckerberg and his followers have a will, there’s usually a way. “Imagine enjoying a courtside seat at a game, studying in a classroom of students and teachers [who are] all over the world, or consulting with a doctor face-to-face,” wrote Zuckerberg, “just by putting on goggles in your home.”
He compared virtual reality to smartphones , suggesting that just as new apps that hadn’t previously made sense on PC now emerged for mobile devices, so VR will spark new ideas.
Schaedler says virtual reality will also be the future of the internet, with companies such as Mozilla already working on 3D webpages. “One day, every website is going to to be a space,” he says, “an environment that you can actually walk into.”
Many others are getting in on the VR act: Sony has unveiled its Project Morpheus VR headset for PlayStation 4 , and Microsoft is developing a device called HoloLens that projects 3D computer-generated images on to a translucent visor, overlaying a virtual layer on to the real world. Google, meanwhile, has invested $500m in a company called Magic Leap , working on a device that operates in a similar way, and Apple is also thought to be working on a VR visor, having hired experts in the field and filed patents for “a goggle system for providing a personal media viewing experience to a user”.
For all the hype around 3D virtual and augmented realities, however, the technology still necessitates strapping a device to your head. Which is something that the spectacular downfall of Google Glass revealed the general public – if not hardcore gamers – are still very reluctant to do.
Odyssey , is at Somerset House, London, until 27 September. Booking required.